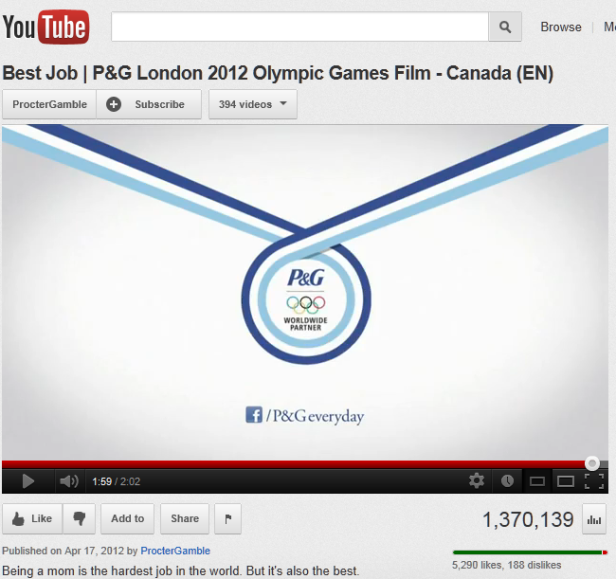 Facebook address means nothing to millions & millions of people?

Early on in the Olympics, I kept seeing this ad by Proctor & Gamble.  It was touching, but what struck me the most was the Facebook address at the end:

Huh… Ampersand in the title – is that right?

Ampersand (&) can be in an address, but it is a reserved character meant for a different purpose than the actual address.

Can an agency in charge of a multi-million dollar campaign really not know this?

Can an agency really run a multi-million dollar campaign with the wrong Internet “phone number” – and no one notices?

Having a web development & marketing company, we sure stress when we publish contact information – we dial the numbers, type in the addresses, scan the QR Codes, and test the @mentions.

At some point the ads with this Facebook address stopped.  But it kept bugging me.

I became positive that this was indeed a bad address, P&G had spotted it, and it had been pulled.

So I googled variations of “P&G facebook URL fail” – nothing.  Tried mashable, nothing.

Well, I was partially right.

It is a bad address, P&G hasn’t spotted it (and apparently no one else has), and it hasn’t been pulled (my lovely wife just saw it on TV! And found it on P&G’s YouTube channel).

Has no one really noticed this?  I can’t believe (really – can’t!) that I’m the only one.  Yet, the ad is still playing to millions of viewers.  On YouTube Proctor & Gamble still have it playing (and 1.3 million views later, it still has the wrong address).

Has this story already made the rounds, and P&G didn’t get the message?

Am I missing something?  Or have millions & millions of people & dollars missed something?

Or maybe, that Facebook address at the end doesn’t mean anything.  That would be hard to take (afterall – online marketing is what I do for a living!).  Please tell me it isn’t so…