So, on Day 11, I had a guilty conscience and couldn’t ignore 99Designs anymore.

My attempt at crowdsourcing some sort of creative humour had for the most part failed.  My request got back mostly a bunch of Google searches for “geek humour” copied & pasted as submissions – 57 and counting to be more precise.

Even though it would take precious time from my 1/2hr/day – I still felt I owed everyone some sort of reply and a chance to move forward (after all, there were some that did a better job of hitting the mark).

Hello everyone – Thank you very much for all your designs. What I am looking for is some messaging around CSS/Responsive humour.

Borrowed humour is fine, but it should be around the CSS/Reponsive humour and how that might play out as the heat sensitive mug transforms from one image to the next.

The best (if at all possible) is a bit of original humour.

So, for example, with this entry: https://99designs.ca/cup-mug-design/contests/design-mug-looking-simple-geek-humour-required-676067/entries/46

To make this related to CSS, it could be changed to “When nothing is going right, float left” (float left is something you do with CSS).

A number of you have provided options with transitions. As an example, here is one that shows this transition:
https://99designs.ca/cup-mug-design/contests/design-mug-looking-simple-geek-humour-required-676067/entries/36

I actually kindof liked the last one – by reversing the transition it gave the sarcastic CSS IS AWESOME a positive twist…  Or perhaps, I’m just grasping at straws…

Don’t confuse with the positive

I ALMOST mentioned that I liked the positive twist in my message to the 99design designers – But I’m getting good (I think) at not confusing the main message – And I feared that if I added this too-much-detail, I’d get results almost identical to:

So unless something radically different happens, I’m going forward with a CSS IS AWESOME transition – it’s the closest to doable in the timeframe left.  Artwork has been sent, still figuring out getting a sample & pricing!

Another path (for next time)

Oh, and also – my friend Peter Toi mentioned that “there are probably more people reading your posts than you realize” – and he’s right, because I didn’t realize he’d read any.

We brainstormed a bit today at the office.  He told me that there are real “Collapsible mugs”!

This one looked the most promising: 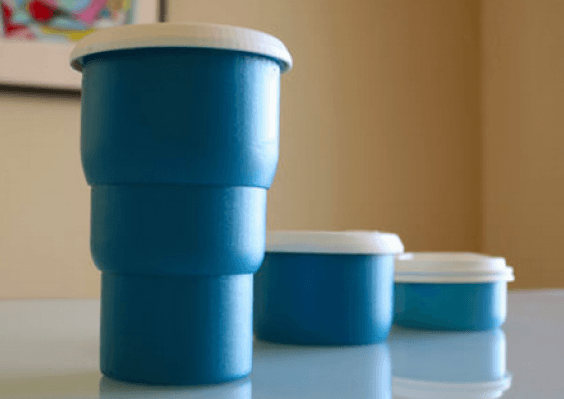 Oh well, too late to pursue this path, but cool to know!